Ice Bath Needs Beyond the Changeroom

Let’s have a look at some instances that you may not have considered where the Pride on the Line Recovery Baths have been called upon to aid in athlete ice bath recovery.  Aside from their use in change room or locker room facilities for the use of sporting teams or clubs, there are many other scenarios which call for either permanent or semi-permanent ice bath setups.

Quite often in the world of sport there is a necessity to move off site from usual facilities to train or play elsewhere for a variety of reasons which may be temporary and/or short-term arrangements or they may be for extended periods of time.  The common denominator regardless of which situation presents itself is the necessity to maintain ice bath recovery processes despite the geographical location of the team. 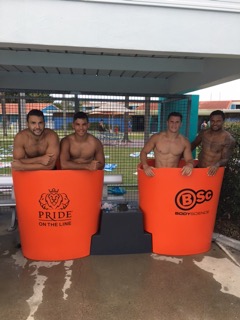 For instance, there are numerous examples Australia-wide where a number of sporting codes share common facilities at stadium venues.  Although these arrangements are coordinated and for the most-part are able to accommodate all parties, there are instances in which the stadiums may host sporting competitions over prolonged periods which are specific to one of the codes.  This introduces a temporary relocation requirement for the remaining teams, requiring them to move to alternative venues for the duration of the competition which could equate to several weeks or months off site.

Often other sporting facilities or perhaps even schools are called upon to house teams that are forced to relocate and they may or may not be equipped with all of the necessary training and recovery provisions, including ice baths.  In this instance, the Pride on the Line Recovery Baths are perfect as both an interim and long term solution as they provide a stand-alone ice bath facility which can be housed without the requirement of any tedious disassembling or reassembling.  In addition to which they can be easily transported to other locations with ease ensuring that they become a long-term asset to the team or club.

Ice Bath needs due to stadium use

One such example of such a scenario was the relocation of the Melbourne Storm National Rugby League side during the 2015 AFC Asian Cup.  The Storm, whose home base is ordinarily AAMI Park in Victoria, Australia were required to move off-site for the duration of the tournament and were in need of suitable ice bath facilities at their temporary home.  Pride on the Line were able to provide two customised Recovery Bath Duo units for the team which were seamlessly integrated into the temporary training facility and were easily removed at the completion of the relocation.

Craig Sultana , Head Trainer at the Melbourne Storm noted at the time that:

“We have used the Pride on the Line ice baths for the entire month of January whilst we had to relocate our entire training facilities to an offsite location during the Asian Cup Tournament.  Having Pride on the Line ice baths has made the transition seamless from a recovery point of view and has given us a more professional approach to what the alternative was. The ice baths are easy to setup, safe and allow our athletes to recover the same way they do when we are at our normal facilities at AAMI Park with fixed ice baths. I would recommend these ice baths to any sporting club looking for a safe, professional Australian made alternative to what is currently out there in the marketplace”.

Similarly, club facility upgrades and renovations, much like those in the home, often bring about the necessity to relocate for a period of time and just as with a home renovation, you also like to ensure that you have your creature comforts close at hand.  This is particularly important for sporting teams preparing for a gruelling season, needing to ensure that their preparation (or recovery) isn’t compromised by inconvenience.

This was recently the case with the Gold Coast Titans National Rugby League Club in Queensland, Australia who were required to vacate their facility during upgrades and renovations.  Head of Performance at the Titans, Matt Ford noted that:

What about setting up an entire mobile training facility in another country for example?  The Pride on the Line Recovery Bath Compact and Duo were recently used by a number of teams during the UEFA Euro 2016 competition in France.  In such instances teams are required to move to numerous locations within the host country during both group and finals stages so it is important to ensure that the ice bath facilities are both practical and generous and are workable enough to be placed in a number of different environments such as on grass or indoors.

The generous size and depth of the Pride On The Line ice baths ensures that the athletes using them are able to obtain cold water therapy on the go within facilities that will allow them to obtain full body immersion whilst providing enough room to move the body within the vessel, much like they would in a built-in environment.  Again, the key feature here is the ability to make moving off site as seamless and user friendly as possible.

We speak so much about the extremely important aspects of safety and practicality of the Pride on the Line Recovery Baths but also of significant importance is the convenience that the ice baths provide.  The next time you or your team have to pack-up and move for a short or extended period of time, there needn’t be any cause for concern when it comes to having ice bath facilities close at hand which won’t blow your budget and won’t leave you waiting in line to recover.

With the additional feature of branding your ice bath you have the opportunity to bring a part of the team or club with you, proudly displaying your logo and making your temporary space feel a little more like home.