The Pride on the Line team always reiterate the fact that ice bath recovery is for all levels of athletes, of all sporting backgrounds.  What makes our continuous desire to spread this knowledge and information so much more rewarding is seeing examples of country clubs stressing the importance of adequate, safe and professional ice baths for their affiliates and doing their best to ensure that they acquire them.

As is often the case with such examples, the ripple effect is that entire sporting communities are able to reap the rewards of improving not only ice bath facilities but those of club rooms alike, to ensure that professional environments are provided for the athletes, club members and the general public alike.

A recent example of such an outcome was the upgrade of the Crystal Brook Football Club facilities.  An article written by Patrick Martin and posted on The Flinders News on 9 August, 2016, link http://www.theflindersnews.com.au/story/4084705/new-brook-roosts-unveiled/, details the improvements which were made to the club facilities with a particular emphasis on ice baths.  The article reads as follows: 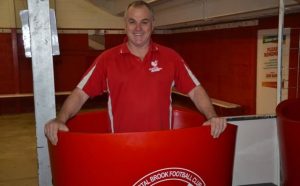 Footballers and the general public are set to benefit from upgrades of the Crystal Brook Football Club.

The club has spent just under $300,000 on upgrades of their training and public facilities.

A designated umpires change room has been installed, along with a new trainer’s room and two specialised ice baths for player recovery.

New toilets, including disabled access toilets, have also been installed for both general public and club use.

President of the Crystal Brook Football Club Ian Lambert said that the upgrades would make a “huge difference” to the club and community.

He said that the new additions had been met with “only positive” feedback.

The toilets are set to have their first serious test this coming weekend as the 2016 Crystal Brook Show opens.

“They will be a great edition to the show and also for the finals, which will be later this year,” he said.

Mr Lambert said that the new trainer’s room would also serve as a treatment room for ambulance crews during the show.

The football club has over 120 players across senior and junior teams.

Mr Lambert was particularly pleased with the introduction of proper ice baths for athletes to use.

“Now the new specialty baths can take two players at once.

“Without the ice bath, players legs can feel heavy for two or three days after the match.”

Mr Lambert was also pleased that the renovations would give umpires a more professional game-day experience.

“We never used to have umpire’s rooms … the old rooms were well passed their used-by-date.

“The umpires did not have any privacy, now they will have somewhere to get changed away from other players.”

Mr Lambert thanked the clubs committee and members for aiding the upgrade process.

Mr Lambert confirmed that the club is also planning further upgrades to their football facilities.

Additional showers in the home team change room are also set to be upgraded.