Ice Bath Recovery On The Go.

Athletes prepare for the Olympic Games through several years of intense, focused physical and psychological training, working with coaches to determine the ideal training plan to reach their peak athletic performance just as the Games commence.  Upon settling into their temporary homes away from home, athletes have the capacity to recover in communal recovery environments which are available to athletes from all countries, or, if accommodated, they can recovery in customised zones created by their own countries high performance departments.

The New Zealand Olympic team has produced one such example with the introduction of its new recovery centre at the 2016 Rio Olympics.

Integrated as part of this centre is the Pride on the Line Recovery Ice Bath Duo which has provided both a cold and contrast water therapy solution for athletes.

With the unique design and the ability to be either a permanent or portable ice bath solution, the Recovery Ice Bath Duo was the perfect option to give athletes at the Games every chance of recovering in a professional ice bath facility away from home.

The following article which was released on 2 August, 2016 on the High Performance Sport New Zealand website via the link http://hpsnz.org.nz/news-events/maximising-performance-rio-preparation-and-recovery-centre, details how and why the customised recovery centre was established and the benefits that it has the ability to provide the athletes. 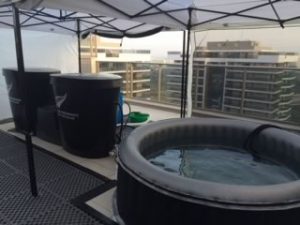 Zealand, in partnership with NZOC, to help Kiwi athletes find that extra edge in the white-hot environment of Olympic competition.The areas will be based in the Rio Olympic Village and will focus chiefly on aiding preparation and recovery for athletes in the New Zealand Olympic team.Led by HPSNZ’s Athlete Performance Support General Manager Martin Dowson, it will be the first time Kiwis will have access to such a facility at an Olympic Games and he believes it could play a crucial role in helping athletes maximise their potential.

“The preparation and recovery areas aim to mimic and simulate the athletes’ daily training environment as closely as possible to allow them to perform to their best,” says Martin Dowson.

“If we don’t provide ice bath service, there is likely to be more disruption to their trusted and normal practices, which could impact on performance.”

It was discovered that compared to other nations, Kiwi athletes’ recovery strategies were being compromised by having to share a communal gym used by dozens of other nations, and that the physical preparations involving certain Kiwi athletes had to take place outside, in the Village gardens.

Post the London Games, Dowson was invited to share the Village facilities of several other nations including the British and the Dutch, whom he says boasted “quite exceptional” areas in which to physically prepare and recover. The decision emerging from the Review was that New Zealand should replicate something similar for the Rio Games.

“When you see such fine margins between getting on the podium or not, we thought we could support our athletes more by allowing them to better prepare, because the previous ‘shared’ village facilities were quite limited,” he says.

“There was an opportunity to further enhance our athletes’ performance, and we’ve taken it.”

So now High Performance Sport New Zealand – with the support of NZOC – will roll out more sophisticated preparation and recovery areas, for the first time at an Olympic Games.

Based in the New Zealand accommodation block in the Rio Olympic Village, the areas will also include a resistance training area – set up like a gym – in the basement of the building.

Additionally, a physical preparation area will be laid out to include hot and cold recovery pools, Watt bikes and stretching mats. A third area in the kitchen will supply nutritional support to help aid recovery and ensure a safe and hygienic space to clean and prepare food and drink. Meanwhile, a fourth area, ‘the quiet space’, will help athletes execute their pre-competition mental preparation techniques and/or provide an alternative place to down regulate.

Black Sticks hockey player Shea McAleese was one athlete who benefited from the preparation and recovery area set up at the 2014 Commonwealth Games and believes it will benefit the Kiwi athletes again in Rio.

At the London 2012 Olympics, McAleese recalls having to wait for equipment to become free in the communal gym area and having a lengthy walk to the Food Hall at the Olympic Village to take on board pre and post-match nutrition.

However, in Glasgow the easy accessibility of gym equipment and nutrition made his and the team’s preparation a far smoother process. He says as he and his team-mates would often eat five to six times a day when in heavy competition mode, being able to easily grab a protein shake or a muesli bar to aid recovery, should not be underestimated.

Meanwhile, having easy access to a Watt bike is far less demanding on the legs than going for a run, which might otherwise be the preferred post-match recovery option should bikes not be available.

“In Glasgow the preparation and recovery areas made a difference, for sure,” says McAleese, 31,
who was selected for the New Zealand team at the Rio Olympics.

“I am one of the older players (on the team), so I need to make sure I look after my body from the start to the finish of the tournament.

“I believe doing those extra bits and pieces in the recovery areas will allow the players in the squad to be in peak condition when it matters at the business end of the tournament.”

Martin Dowson will oversee the operation of the preparation and recovery areas alongside strength and conditioner Stephen Hotter, performance nutritionist Dane Baker and performance physiologist Julia Casadio. The hours may be long and demanding for the staff concerned, but Dowson insists it is an investment of effort well worth making in the hyper-competitive world of Olympic sport.

“When hundredths of a second separate the top athletes and the margins are so small, our “leave no-stone-unturned” approach and attention to detail could just make the difference,” he adds.